I recently served on the 2019 Technical Panel for the Social Security Advisory Board, whose mission is to review the assumptions, methods, and presentation of material in the Social Security Trustees Report. Our Report represents the collected views of ten panelists including actuaries from different worlds such as the Chief Risk Officer and Director of the largest international life and health reinsurer, the SVP of an even larger insurer, and the founder/CEO of a pension consulting firm. The group also included eminent economists and a demographer and consulted with experts including Social Security’s Office of the Chief Actuary (OCACT).

Our Panel provided suggestions that we believe will be useful to OCACT, taxpayers, policymakers, and others. These recommendations were the result of a great deal of trust and respect for each other, leading to a strong consensus for our report’s recommendations. Below I outline some of the points we made.

The Role of Modeling
OCACT uses many computer programs to project future income and outgo of the Social Security system and has been able to generate results quickly in the past. Their workload is likely to increase as the Trust Fund depletion date draws near, so we recommended some modernization. For example, they already use a separate microsimulation program to project benefit payments because beneficiaries with larger benefits live longer on average, so we suggested it (and others) be integrated into their model.

We also noted that the low-cost forecast is far outside the OCACT stochastic projections, and it is unlikely to happen (as noted in the Trustees Report), so we suggested that the Low- and High-Cost Projections be replaced by the 95% confidence interval.

Assumptions are Key
Forecasting benefits and revenues to the Social Security system requires making assumptions about the future, and one of the most important has to do with how long participants will live. Mortality improvements over long periods in the past have averaged about 1% per year or more, but we cannot know if mortality will improve at the same rate in the future.

There has been little or no improvement in mortality projections in the recent past. Moreover, a survey of doctors projected a slowdown in mortality improvement, but their forecasts only go out 30 years. Thus, our Panel recommended that the actuaries phase into the 1% ultimate rate more slowly and incorporate greater uncertainty when projecting future patterns. Moreover, the ultimate rate of mortality improvement is likely to continue to differ by age group. These trends need to be tracked closely.

Presentation of the Results
Our Report offered several recommendations regarding how material can be more effectively communicated. For instance, we recommended replacing numbers with charts (and including hyperlinks to the numbers) as more can be gleaned from a chart than numbers and words. An example of the original and proposed presentation appears below: 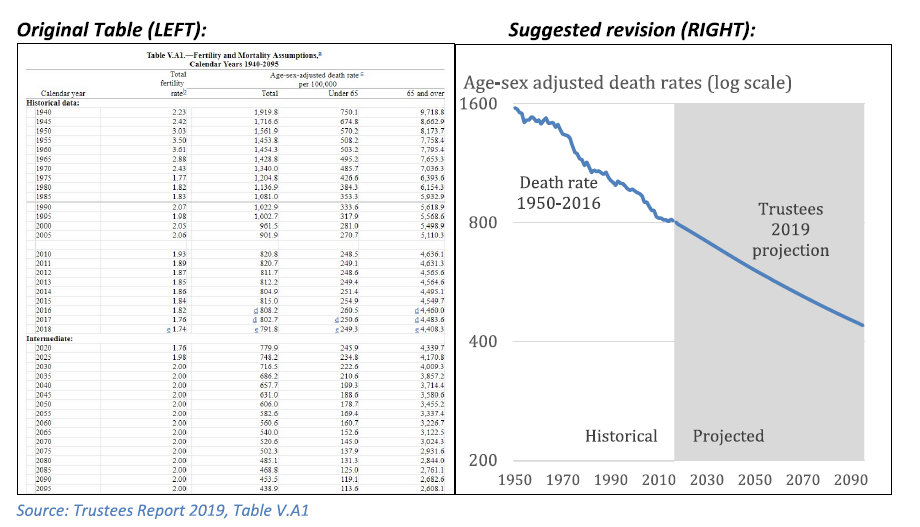 We also suggested that plain language be used where possible, accompanied by greater external access to the projection models used for the Trustees’ Annual Reports.

Conclusion
After incorporating all our recommendations, the OCACT concluded that the net impact would increase the system’s projected actuarial imbalance by 0.74% of taxable payroll. While that is a large change when compared to the system’s net imbalance, it is less than 5% of the program’s total cost. Thus, we wrote that OCACT’s projections are not unreasonable.

Finally, I’ll note that new knowledge is constantly emerging. I just read a new Study Note on Mortality Improvement where Professor Mary Hardy discusses problems with using the Lee-Carter Model for actuarial applications, due to its poor fit and implicit assumption that mortality improvement is perfectly correlated over all ages. In other words, projections are still improving, and when the next Technical Panel meets in four years, there will surely be more to discuss.